A UBOS Device can be thought of as always being in a particular state. The following diagram shows these as a state chart: 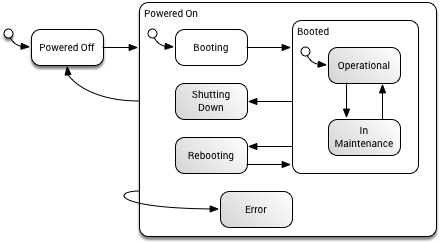 A UBOS Device can either be in one of the following two major states:

When “Powered On”, initially it is:

Once ubos-admin completes, the device goes back to being “Operational”. The device can further be:

While it hopefully never happens, the device can also be in state:

If the device enters one of the states shown with a gray background, a state transition callback is performed as described next.

When UBOS transitions from one state to another, it invokes callbacks defined in /etc/state-callbacks. Callbacks are defined as follows:

The values for the states are the same as the gray-shaded states shown in the diagram, except that blanks are removed: Operational, InMaintenance, ShuttingDown, Rebooting and Error.