In this section, we will browse through some of the (mock) Facebook data you imported previously and touch on:

Let’s look at the photos imported from Facebook, and introducing MeshObjects

Go back to the front page of your Docker container at http://localhost:1080/. Click on “Photo” (below the “Media” headline).

This will bring up the list of the (mock) photos our mock user supposedly has uploaded to Facebook. Scroll down a bit, and you should see a screen similar to the following: 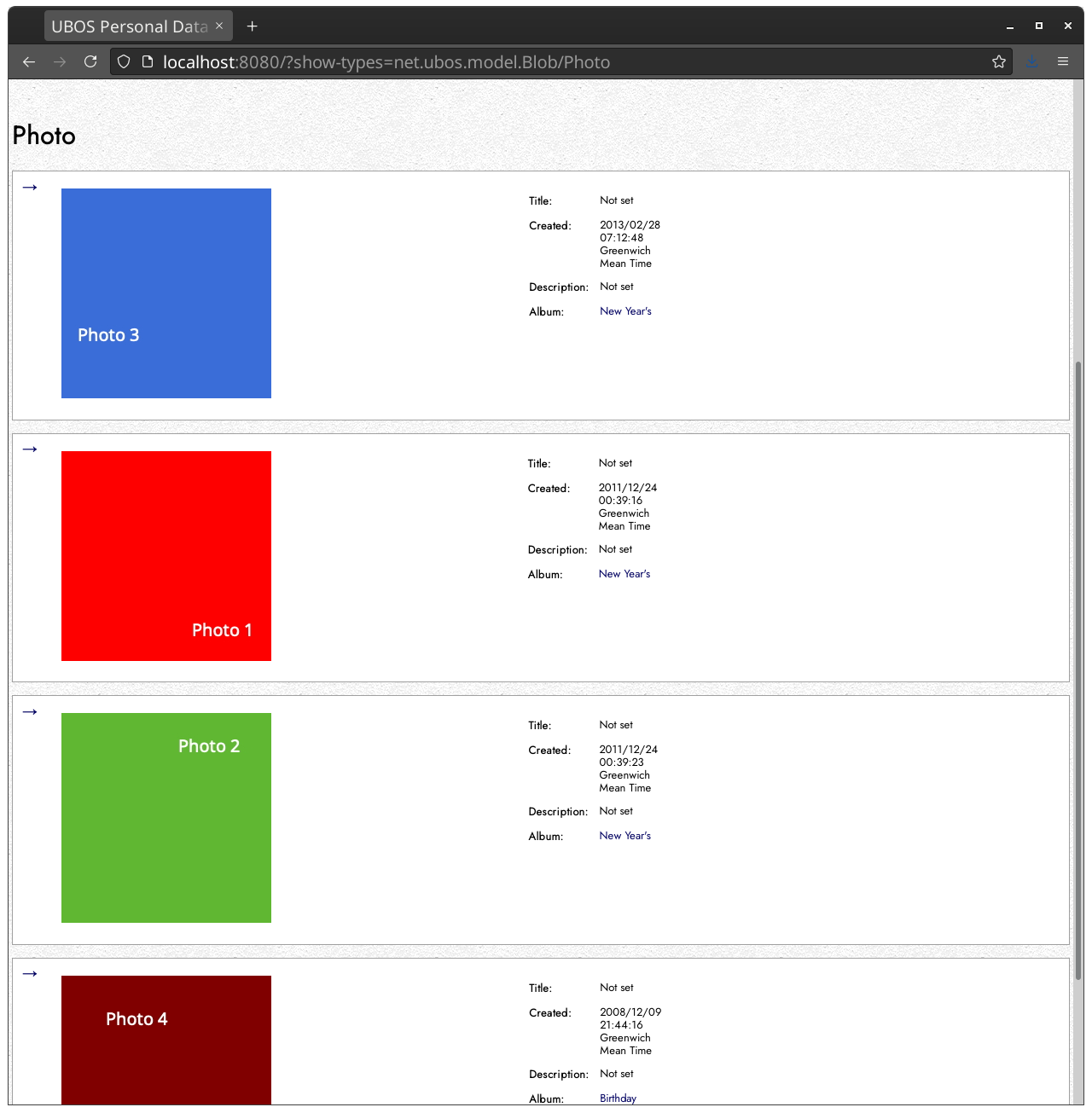 On the left, we see the (mock) photos, and on the right side, the metadata exported by Facebook, such as when each photo was created.

Note the “Album” label next to some of the photos. Click this label, and you will see the Facebook album that contains this photo on Facebook – together with all the other photos in the same album. 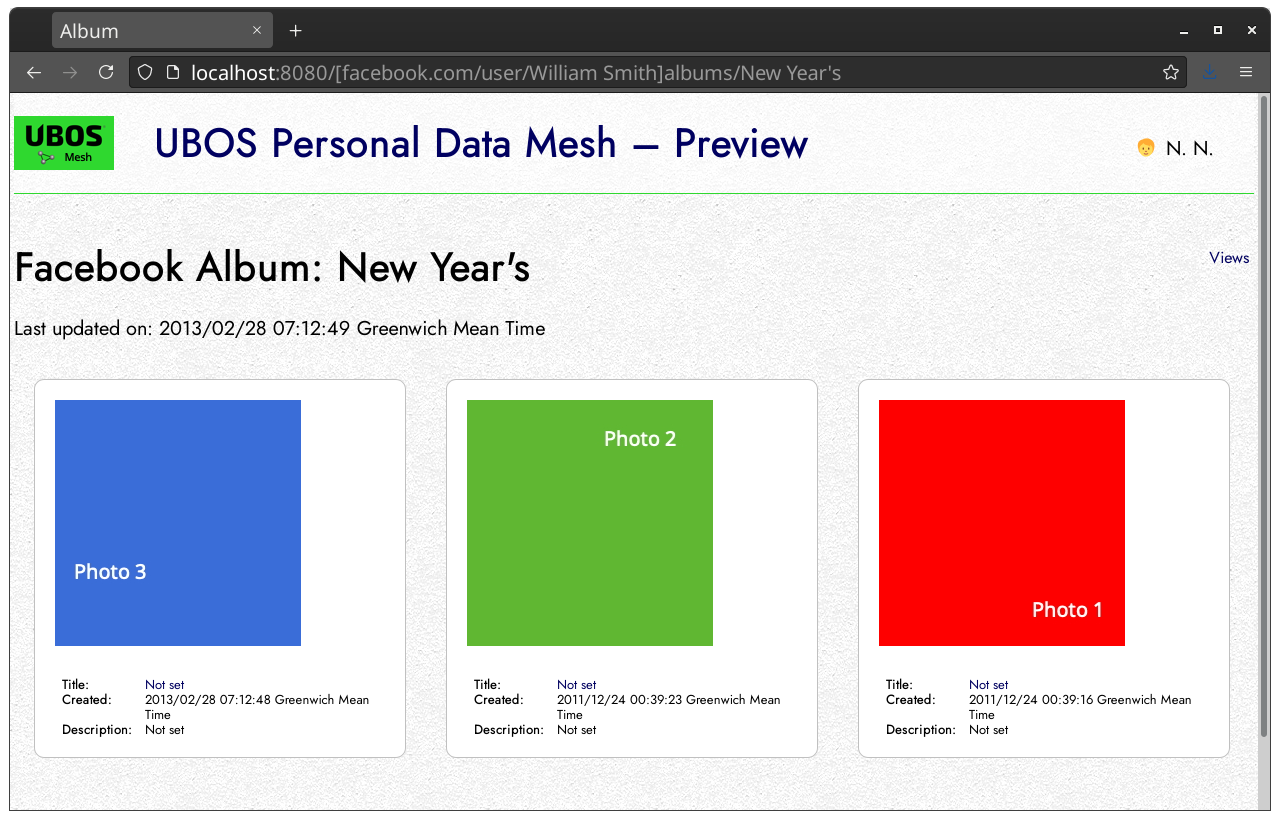 Data elements on the UBOS Personal Data Mesh are called MeshObjects. There is much to say about MeshObjects – for now, only a few tidbits:

Most importantly: all personal data on the UBOS Personal Data Mesh is represented as MeshObjects. If you are looking for where data is stored, always look for a MeshObject (and not a database table or such).

The UBOS Personal Data Mesh automatically manages the integrity of these relationships in both directions, so they never dangle or become inconsistent. You don’t have to do anything as an application developer. (Makes software development easy, no?)

Go back to the front page (click on the logo upper-left), and then click on “Facebook message”. As you would expect, that shows you all messages that our user sent and received with Facebook Messenger. 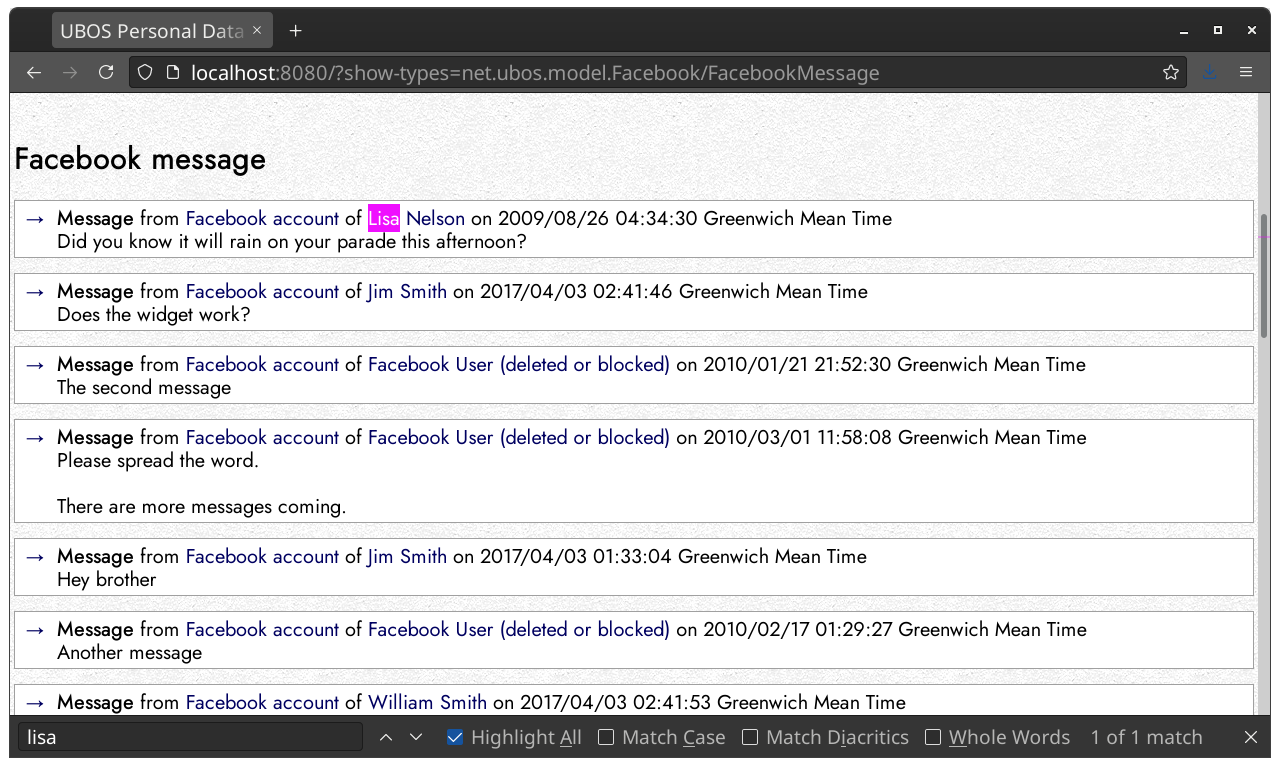 For this tutorial, select a message sent by “Lisa Nelson” saying something about rain. This shows the message, again with some metadata, one of which is field “Thread”. 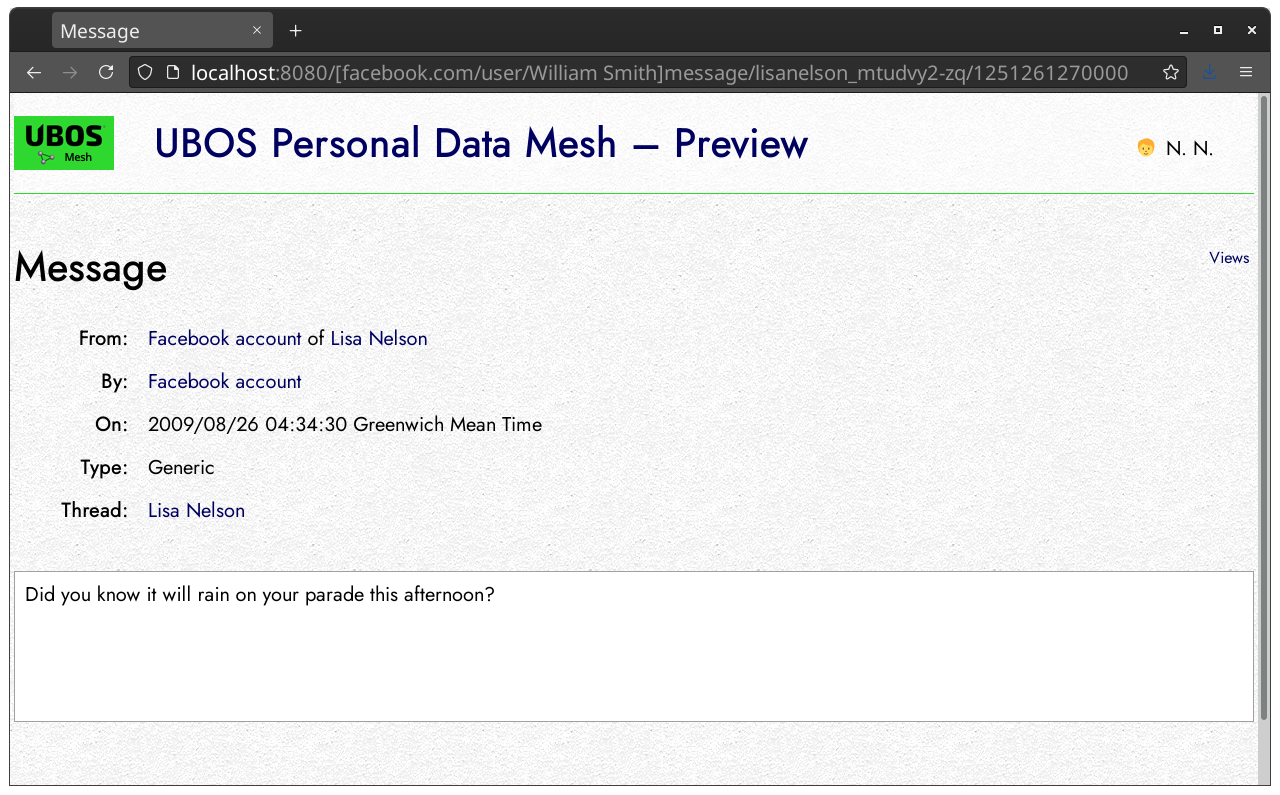 Facebook collects messages in threads. Click that thread, and now you see all messages that are part of this message thread. 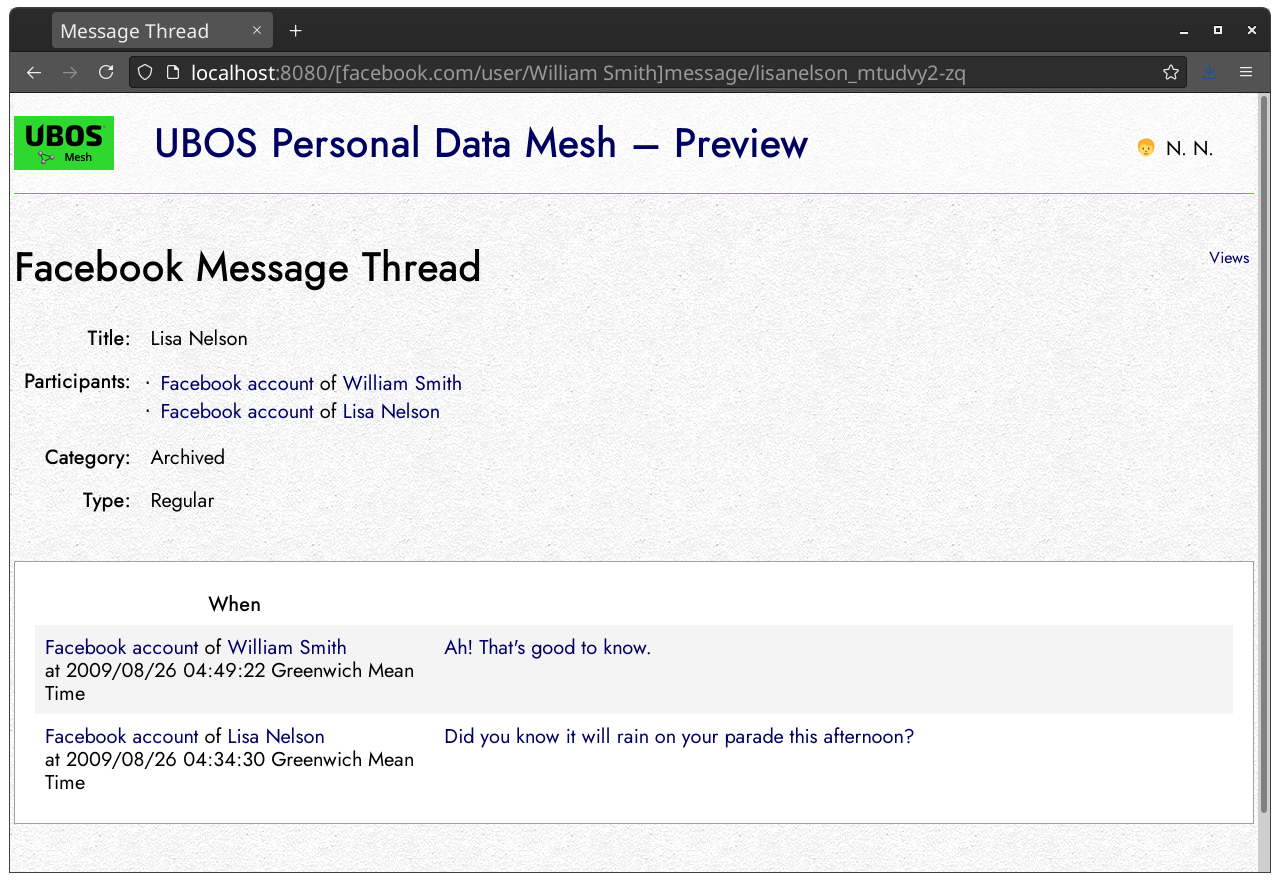 You probably noticed that the user interface is different based on what type of data element, aka MeshObject you are looking at. That’s of course what most web applications do, but the UBOS Personal Data Mesh doesn’t have a global “route” table; instead, it’s a competition.

When you browse around data on the UBOS Personal Data Mesh, there is an automatic match-making process between available Viewlets and the MeshObject that’s your current subject of interest. The best match wins, and that Viewlet is chosen to render the current subject, inside the current Skin.

Because there is no static “route” table, this makes adding new Viewlets or even removing default ones very simple, and the UI very customizable.

But there may be other Viewlets that can also render the current subject: click on the little “Views” link towards the top right.

If you select “Properties”, the “Properties Viewlet” will render the current subject instead of the “Message Thread Viewlet” that won the competition. Depending on the type of MeshObject you are looking at, and depending on the set of Viewlets that are available at your installation of the UBOS Personal Data Mesh, the list of Viewlets may be shorter or longer for a given MeshObject.

As developer, you can create your own Viewlets, and they will show up in the user interface at the right time, i.e. when they match what the user wants to see better than any alternative Viewlets. To add a Viewlet, not even a recompile is required. Don’t like our Viewlets? Create your own! (More about that later.)

The “Properties Viewlet” (if installed) is always available to render any MeshObject. It is the fallback if no better Viewlet can be found, and it helps you, the developer, understand the actual data you are looking at.

You may notice that many links in the current version of the UBOS Personal Data Mesh lead to the Properties Viewlet; that’s because we don’t have all that many Viewlets developed yet.

Identifiers for MeshObjects and URLs

This will bring up the specific Facebook message you looked at earlier.

Each MeshObject has its own URL. It’s very RESTful in the original sense of the word. You can bookmark it, e-mail it, and the like, and it will always resolve to the same MeshObject (assuming the user has permission to access this URL).

The square brackets in the URL? We use this convention to indicate the namespace for this MeshObjectIdentifier. More about that later.