Now that you have completed the first section of the tutorial, Getting the UBOS Personal Data Mesh running with Docker, you will:

This is an engineering preview. Many things are still expected to change before this becomes a released product suitable for end users. For example, the Facebook importer does not cover all Facebook data yet, the user interface needs lots of work, the entire import process in this tutorial is something only a hard-core geek could love (whom it is written for, so you can understand how things work instead of hiding them under lots of eye candy), and there many other issues. Expect bugs, too. (Please file them.)

But it’s good enough to give you a taste. So in this spirit, carry on!

Imagine you went to https://facebook.com/dyi (their data export page) and downloaded an archive of your Facebook data. If you did that – and we recommend you do – Facebook would give you a big zip file called, for example, facebook-williamsmith.zip, which contains all your data.

For this tutorial, we have created an archive just like it, but it only contains mock data. The supposed Facebook user William Smith does not actually exist. His (mock) data export file, however, is constructed just as if Facebook had done it. (The sources for the file are here.)

Go to http://depot.ubos.net/mockdata/facebook/. In this directory, you will find the following file:

We will be performing data conversion and import in this terminal.

Remember the shared directory into which you downloaded the (mock) Facebook data file? This directory has been mounted into your container at directory ~ubosdev/shared (i.e. directory shared below your user’s home directory). Go to that directory in the container terminal, and run the already-installed UBOS Personal Data Mesh mesh-converter.

The mesh-converter looks at the structure of the file it was given as the “in” file, makes an intelligent guess about which of the importers it knows about to run (here: the Facebook one), runs it, and exports the converted data in the Universal Personal Data format.

After the command completes, you should now have a .mesh file in the same directory:

Interlude: the problem with repeat imports

Now we have the (mock) Facebook data in the Universal Personal Data format.

We could take that converted data as-is, and send it over to the UBOS Personal Data Mesh. This would work, but only the first time! What if we exported our Facebook data again in six months, and tried to re-import it? We would have lots of duplicates on the UBOS Personal Data Mesh, and what if some data was actually deleted in the meantime? We’d end up with a big mess.

Alternatively we could delete the old version of the Facebook data on the UBOS Personal Data Mesh before importing the new version. But we don’t want to do that either: if we did, all annotations the user might have created on their imported Facebook data, and all relationships between the imported Facebook data and other data, would become orphaned and useless. Another potential mess. (We will discuss this in more detail in a later tutorial.)

Right now, this is our very first import, so the baseline (the “last import”) is empty, and the command to create a file containing the delta is:

Run it. You should now also have a .peertalk file in your directory:

When we have a new version of the Facebook data, say exported 6 months later, we would specify the previous import file as the (then non-empty) baseline, so we only push the difference to the UBOS Personal Data Mesh. (We discuss the algorithm later that creates the delta.)

Like all “data load” operations everywere in computing, his will take a little while. Once the command prints out “Success”, the UBOS Personal Data Mesh will have William Smith’s Facebook data.

(Why is the recommended extension .peertalk? Long story … for some other time, too.)

Refresh your browser window at http://localhost:1080/ (not: 8080 as in the screenshot.) The “No data” message has gone away, and instead you see a search field, and a categorization of the data objects currently held by the UBOS Personal Data Mesh. 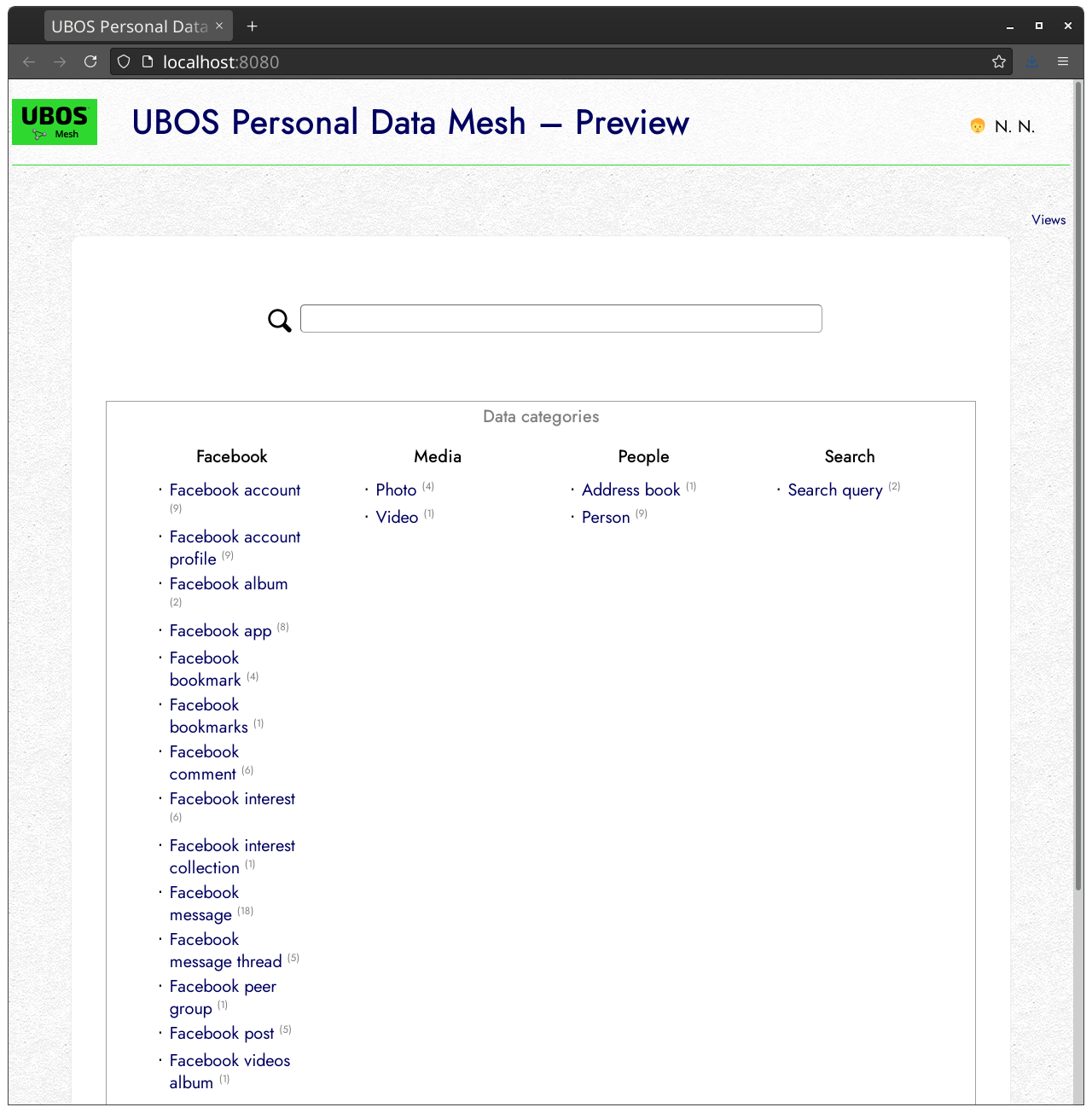 A typical real-world Facebook user would of course have many, many more objects than our mock user William Smith, but they would be in the same categories, and likely some others. (You can certainly try with your own Facebook data later, but we recommend you continue through this tutorial with the mock data first.)

Feel free to click around, but to understand what you are seeing, we recommend you continue with the next section: Browsing the imported Facebook mock data.

In the next section Browsing the imported Facebook mock data, we will examine some of the data shown in the UI, and what that tells us about the UBOS Personal Data Mesh.