Getting the UBOS Personal Data Mesh running with Docker

In this section, you will:

It does NOT work on Apple Silicon at this time.

To install Docker, please refer to the Docker documentation at www.docker.com/get-docker. It may be as easy as downloading and running Docker Desktop for your operating system.

Installation instructions for docker-compose are at docs.docker.com/compose/install.

Installation for git depends on your operating system. On macOS, it is installed automatically when you install XCode.

This tutorial has been tested on macOS and Arch Linux; however, there is no reason they wouldn’t work on other platforms that run Docker.

Check out the project directory from Git

Open a terminal. In a suitable directory, enter:

In your terminal, enter that git directory and take a look what’s there:

You will notice a docker-compose.yml file.

If you previously checked out this repository, run:

Pull the latest version of the Docker container and run it

Pull the latest Docker container from the “yellow” Release Channel (which we use for preview/non-production software):

This may take a little while, as there is lots to download.

The “yellow” channel is currently the default, as the product is not released yet. You can specify another channel, such as “red”, by providing it as an environment variable, e.g.:

Docker may or may not need administration or root privileges on your computer. On macOS and Linux, try running all docker and docker-compose commands with sudo as we show it here; on Windows, run the terminal in Administrator mode.

Then wait until Docker reports on the terminal that it has created the container and attached to it. This might take a few minutes, as the Docker container is first downloaded and then booted.

In your browser, go to http://localhost:1080/ (not: 8080; screenshot is wrong). This will access the web server in the Docker container. 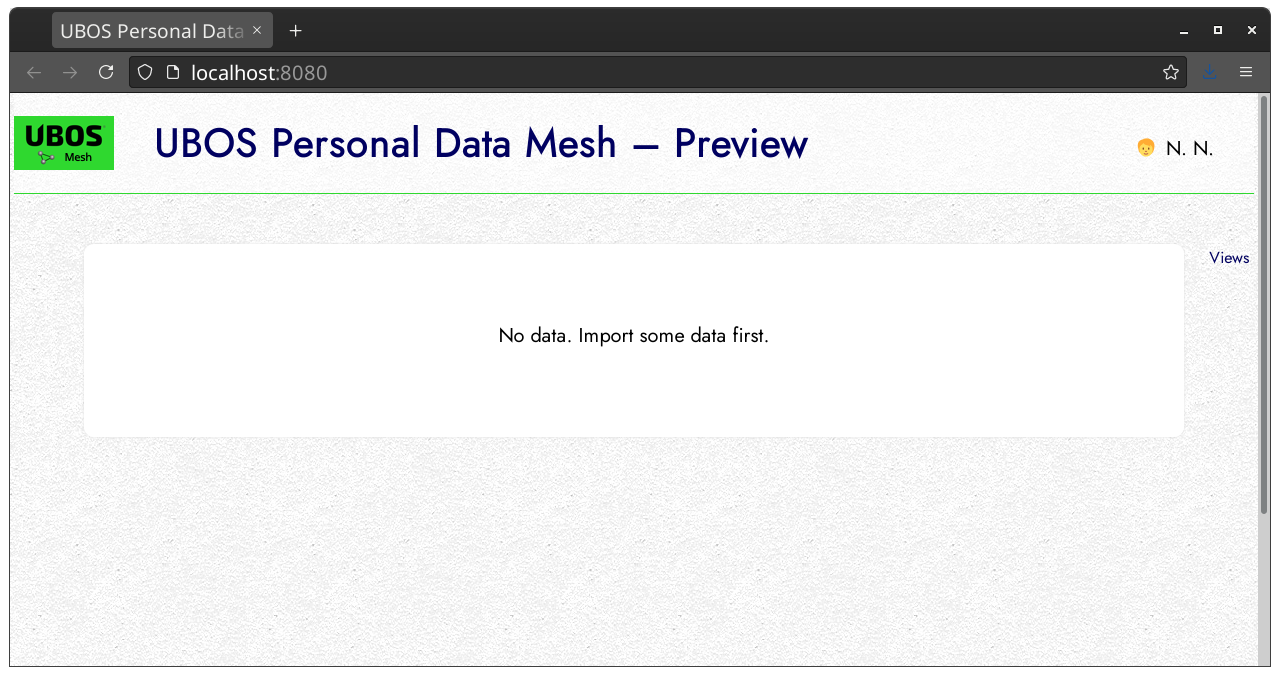 This may first show an error page: “No such site”, saying that the website might still be upgrading. That’s because this engineering preview Docker container only deploys the UBOS Personal Data Mesh when it is booted.

After a few minutes, if you hit refresh in your browser, that message disappears and you get the default UBOS Personal Data Mesh front page saying “No data.”

If you cannot use port 1080, use a different port by changing the “1080” in the docker-compose.yml file to something else, and restart your Docker container.

If you want to stop your Docker container again, simply hit ^C (control-C) once in the shell where you are running docker-compose.

In the next step, let’s import some Facebook data.